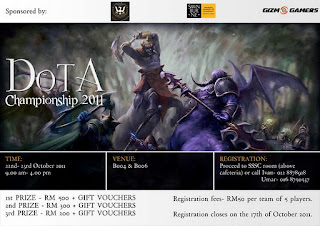 Who would be my latest and reformed player roster? Find out soon as I update this entry! I'll try to make coverage on the results and team encounter I faced in the competition.

Our achievement comes by locally. Five young and talented players recruited as a strong temporary team for any possible competition for fun and challenges! Me or Jeremy will be leading the team and also interested to know our actual local tournament achievement besides university ones?

Mirotic is a player I recruited from West Malaysia studying at Swinburne. Pursuing Foundation of Engineering. MSI semi finalist and has been a very experienced gamer.

Lamborgini is also known as Jeremy. Strong personal skills and had gone until MSI semi finalist and is playing for Xclusive! An experienced carry as well with lots of his surprises.

Royce is none other than MY.RollsRoyce! Possessing many abilities not just in the gaming competitions but also game media reporter and etc. Role focused was supporter in the past local competitions but now evolved into a new all-rounder type of player in the team. Was the team leader of SDT winning until semi finals of Swinburne DotA Championship 2010 and is also a finalist in weekly tournaments made by Gizmo Gamers. Record wise have been winning lots of strong teams covering Sarawak and Sabah not in the competition field but also the training as well. Generally over 35 teams above covering Malaysia has been a challenge to me as well achieving a win over them. Teams such as Gizmo Gaming , Silent Redemption , Cyberline , CoE , Kencool , tyB , Lz , V.Ghost and so much more to be in record. As a team manager of MaDNet Outlawz, who would never have thought I was also a player for various team? Which concludes I have felt my glory over first to forth place in certain DotA competitions. I will still grow on until I got into a well established team and making East Malaysia or the West more refined and be proud of someday.

Vince is a well-played supporter for team MagicX Gaming. He possess lots of experience like his small brother in my team called Angry Birds. He is a very strong contender when it comes to support. Let's hope he do some unique supporting skills in the event!

Smiley is also a player in team Xclusive! His role would always be support and ganks. Experienced and always aim high in goals. 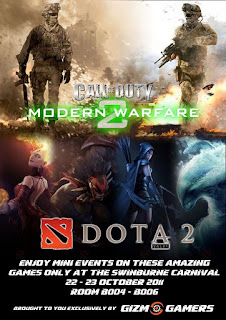 
This is the greatest achievement in history for me this year as I led and formed the team with strong players that synergized well with me. I'm really impressed by our teamwork and how we are able to rebounce to every ups and downs. Team Kolo Mee Gaming will be another history in local DotA scene. This should be my forth championship title and the past record was with team MaDNet Outlawz and DJAN! This tournament consist of many veterans and the finals I had was one of the greatest moment of my DotA competitive history. Well played, no matter if we're opponents or team mates again in future, I do say our team name has spoke for our wins!

Team Kolo Mee Gaming is champion!!!
Posted by Royce at 2:59 AM No comments: 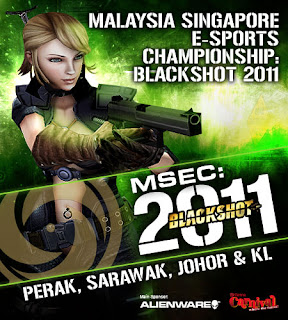 *Players must inform the Blackshot Team 3 days before the tournament if their team can't attend. Failure to confirm will result to 15-day account banned.

Registration:
Please follow the format below to reserve a slot for your team.
Email subject is: [Malaysia] MSEC Malaysia Singapore E-Sports Championship
Email to: blackshotteam@garena.com
Please do remember to write the SELECTED VENUE.

MSEC: Blackshot 2011 - Rules & Regulations
General
1. Competition Method : 5 vs 5
Winner Condition: Most round wins out of 4 rounds played
(2 rounds in Team Flag Match and 2 rounds in Search & Destroy)
Team Death Match will only be played if there's a tie-breaker

-Team Flag Match-
Winner of the coin toss will get to select the map.
 Each game consist of 1 map, players are to play both sides of the map.
 Every side is 120 points and amount of time will be 10 minutes.
 All players are allowed to use cash and gachapon weapons that are not banned.
 Partnership is allowed.

-Search & Destroy Match-
Loser of the Team Flag Match will select the map for Search & Destroy.
 Each game consist of 1 map, players are to play both sides of the map.
 Every side is 5 rounds and amount of time will be 2 minute 30 seconds for each round.
 Map will be chosen by the losing team of TFM.
 All players are allowed to use cash and gachapon weapons that are not banned.
 When a player dies, they are to click away into the 3rd person view and no communication allowed after 3 seconds.
 1 sniper allowed at all times in each team.
 Partnership is allowed.

-Tie-Breaker-
Players are to play Team Death Match.
 This round there will only have 80 points and time taken will be 10 minutes.
 Map used for this round will be Training Camp only.
 All players are allowed to use cash and gachapon weapons that are not banned.
 Partnership is allowed.

Prohibited Actions in Game
- Changing of "HOST" when the match has begun is strictly not allowed, doing so will result in a default map loss.
- Intentional or non-intentional use of any bugs/ in-game Glitch (Knife Bug, Shots becomes Knife Damage) or any kind of usage will result in a loss or disqualification. This decision will be made by the marshall/s or Head Marshall.
- If in any case, a game is restarted, players are not allowed, under any circ-umstances, to go to the Shop/Inventory to change gears/weapons/armor etc.

Disconnections
- Disconnection: Any disconnection of the connection between match players due to System or Power problems/issues.
- Intentional Disconnection: Upon judgment by the referee, any offending player will be charged with a loss by forfeit.
Unintentional Disconnection:
- Round will restart if either side points is 20 and below or below 3 minutes into the round.
- Score will be recorded if either side points is 21 and above or more than 3 minutes into the round, round will restart and end with the previous total score.
- In the event of a disconnection, the organiser reserves the rights to restart the match or determine the match outcome on a case-by-case basis.

Warnings & Disqualifications
A warning will be given to any player in the team when he/she breaks or abuse any rule of the tournament.
A team will be disqualified from the tournament when a total of 3 warnings are given to the its members.

In Case of Problems
-If there are any technical, equipment, game exploit issues, disputes and/or interruptions, the Game Marshal/s are to be informed immediately and without delay. Failure to adhere to the aforementioned could result in a warning or disqualification from the tournament.
- If any intentional hardware reset and problem occurs, the marshal/s may decide to end the match with the offending player losing by forfeit.
- In the Team Flag Match (TFM), any game interruptions will be done after the completion of the round and not immediately during the game. The only time a restart will be done, is if the points of both the Red and Blue teams are under 20.
- In Search and Destroy mode (SD), only one sniper is allowed, and team-mates/opponents are not allowed to pick up the sniper rifle. Players are not allowed to share the sniper rifle with their team-mates at the start of every round.
- Player substitution is only allowed after the completion of every match, and not halfway during TFM and SD or Team Death Match (TDM).

These rules are for the MSEC: Blackshot 2011 and are subject to modification in the following aspects.
- Use of most recent patch/version release of each official game within MSEC: Blackshot 2011 committee's own discretion.
- Changes to in-game settings and options necessitated by the use of most recent patch version/release.
- Cheat Protection Program release and/or cheat protection functions.
- Game settings and/or operations guidelines dictated by differences between online and LAN Tournaments.


*Event rules and mechanics may change without prior notice.